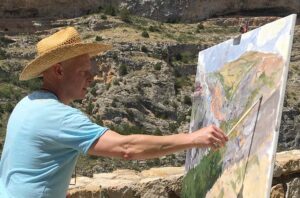 Since I was 12 years old, I’ve felt a big passion about painting, it has become a source of continuous research and self-criticizing with myself.

Through my pictures we can see different ways of understand the art slowly shaping painting in the landscape mainly.

In 1989 I moved to Pamplona, to definitely live there.

The light’s change that I saw in the atmosphere of Navarra, became my way of painting more colorful but I kept the influence of my pictorial roots.

I began my artistic path in Pamplona, where I counted with unconditional followers since my beginnings, and slowly I started to fit into the Spanish panorama. In 1996 I even got selected in the “Basque artists” book, edited by Bilbao Arte.

My artistic and emotional links with the country where I came from, allowed me make some exhibitions there.

Without doubts, this link between two cultures, becomes me a painter with own style in a continuous evolution and with the same excite that I had the first day that I decided to get involved in this adventure, and with that I try to surprise and excite people in each exhibition.

Daniel Menéndez Isturiz, better known as Dan Isturiz, was born in Paris the 15th of April in 1966. I developed an interest in drawing and painting since I was so young, thanks to the painting addiction that my father had and knew how to transmit me.

Also, with him, we watched big pictures of big artists, in the French capital’s museums.

When I was 12 years old, I started to paint in the studio of the French painter Raymond Thialier, who I take in consideration one of my masters, just like my father.

Painting teacher at the San Anton Academy in Pamplona.